Should You Tell Jokes at Marketing Seminars? 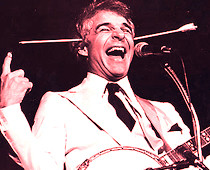 Should you tell jokes during your marketing seminars? This can be a risky venture. You want to be LIKED and TRUSTED by your seminar attendees so they will take the leap and schedule a first meeting.

If your jokes aren’t funny you risk being liked. If your jokes are deemed offensive, you definitely won’t be liked. You might ask, “How hard can it be to come up with some funny jokes about retirement planning, living trusts, or wills and joint tenancy?”

“I love money. I love everything about it. I bought some pretty good stuff. Got me a $300 pair of socks. Got a fur sink. An electric dog polisher. A gasoline powered turtleneck sweater. And, of course, I bought some dumb stuff, too.” — Steve Martin

I spoke today about telling jokes with a member of one of my local networking groups. Irv sells Aflac insurance policies and once took a stand-up comedy course in Southern California. He said that you need to write 100 jokes to get 10 worth trying out. Out of the 10 jokes you might get 1 which would be worth repeating. That’s one in a hundred.

Irv told me that comedians usually tell 3 jokes per minute.  So a 5-minute comedy routine would include 15 jokes from 1500 jokes written up! Now you know why comedians like Jay Leno and David Letterman have a team of joke writers to come up with enough funny jokes for each night’s monologue.

Irv told me in the old days, a vaudeville comedian could come up with 20 funny jokes. These jokes would work for decades as the vaudeville troupe traveled from town to town. Not any more in these days of YouTube and Facebook. Funny comedy routines go viral and are everywhere.

Thankfully, your seminars won’t be recorded and your audiences will be different every time. You won’t need fresh jokes for every seminar. Find ones which work and use them over and over again.

I know one estate planning attorney who has told the same jokes for more than 20 years! He tells every audience that he has “never seen a hearse pulling a U-Haul trailer” and he gets laughs every time. He tells it more like a story anyways so audience doesn’t really need to “get it” and laugh on cue. No one gets offended. No one gets embarrassed. And he gets attendees to like him and sign up for a first meeting.

My general recommendation is to tell stories not jokes. Don’t poke fun at anyone but yourself. And never tire of telling the same stories over and over. Your goal is to get new clients and not get a job as a stand-up comic. A funny joke which bores you is way better than a fresh one-liner which offends someone in your audience. And that’s no laughing matter! 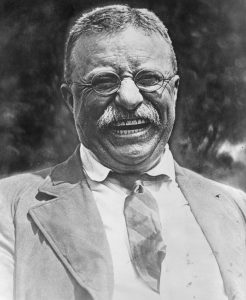 While on his latest vacation in Martha’s Vineyard, President Obama had the Oval Office redecorated to reflect both his aesthetic as well as philosophical taste. His new beige carpet has quotes from 5 major historical figures. One is attributed to Teddy Roosevelt:

“THE WELFARE OF EACH OF US IS DEPENDENT FUNDAMENTALLY ON THE WELFARE OF ALL OF US” – From a speech Teddy Roosevelt gave at the New York State Fair in Syracuse, N.Y., on Sept. 7, 1903.

Over a hundred years ago, John E. Kennedy observed that “copywriting is salesmanship in print.” Every ad is made up of copywriting (the words for the headline, body, and offer) and graphic design (font type and size, pictures, colors, etc.)

I’ll leave the aesthetic critiques of the makeover to others. Let’s ask one question: Did this quote really help sell President Obama’s product? The product can be ObamaCare, Banker Bailout, Automaker Bailout, Green Energy Subsidies, etc.

Or was the quote taken out of context which reversed its meaning?

Thankfully, author Susan Shelley took the time to read Teddy Roosevelt’s entire speech. Her conclusion was that a lot more of the speech should have been printed on the carpet. I suggest that would make the “advertisement” less effective. Perhaps he should have quoted a former president who did so much to expand socialized medicine for people over 65 years old: President George W. Bush. Perhaps not.

Let’s take a look at some of Susan Shelly’s article and see how the quote was taken out of context. I bolded a few choice quotes which might be used for future White House renovation projects.

A reasonable person might interpret this selection as an indication of President Obama’s core belief that the president’s job is to “spread the wealth around.” He is unafraid and undaunted, the quotations suggest, in his quest to bring moral justice to “the people.”

Unfortunately, a rug has only so much space, and President Obama had to cut somewhere. Therefore, as a service to you, the reader, America Wants To Know looked up Theodore Roosevelt’s speech at the New York State Fair in Syracuse, New York, on September 7, 1903, and we now present some of the quotations from that particular speech that are not on the rug:

“The failure in public and in private life thus to treat each man on his own merits, the recognition of this government as being either for the poor as such or for the rich as such, would prove fatal to our Republic, as such failure and such recognition have always proved fatal in the past to other republics. A healthy republican government must rest upon individuals, not upon classes or sections.”

“Again and again in the republics of ancient Greece, in those of mediaeval Italy and mediaeval Flanders, this tendency was shown, and wherever the tendency became a habit it invariably and inevitably proved fatal to the state. In the final result it mattered not one whit whether the movement was in favor of one class or of another. The outcome was equally fatal, whether the country fell into the hands of a wealthy oligarchy which exploited the poor or whether it fell under the domination of a turbulent mob which plundered the rich.”

“The reason why our future is assured lies in the fact that our people are genuinely skilled in and fitted for self-government and therefore will spurn the leadership of those who seek to excite this ferocious and foolish class antagonism.”

“There is no worse enemy of the wage-worker than the man who condones mob violence in any shape or who preaches class hatred; and surely the slightest acquaintance with our industrial history should teach even the most short-sighted that the times of most suffering for our people as a whole, the times when business is stagnant, and capital suffers from shrinkage and gets no return from its investments, are exactly the times of hardship, and want, and grim disaster among the poor.”

“Legislation to be permanently good for any class must also be good for the Nation as a whole, and legislation which does injustice to any class is certain to work harm to the Nation. Take our currency system for example. This Nation is on a gold basis. The treasury of the public is in excellent condition. Never before has the per capita of circulation been as large as it is this day; and this circulation, moreover, is of money every dollar of which is at par with gold. Now, our having this sound currency system is of benefit to banks, of course, but it is of infinitely more benefit to the people as a whole, because of the healthy effect on business conditions.”

Yes, Theodore Roosevelt was crediting the excellent condition of the public treasury to its adherence to the gold standard. Sound money is good for the American people because it’s good for business conditions. That’s what TR said.

That’s not on the rug.

When “business is stagnant and capital suffers from shrinkage and gets no return from its investments,” it means “grim disaster” for the poor.

That’s not on the rug, either.

Turns out TR had no use for the man who “preaches class hatred” and believed the nation would always “spurn the leadership” of those who stir up “foolish class antagonism.”

TR said the rich and poor must be judged as individuals and treated equally under the law. He warned that republics were just as much at risk from those who “plundered the rich” as from those who “exploited the poor.”

You can bet that’s not on the rug.

It turns out that Teddy Roosevelt’s state fair speech, on Labor Day, was not a call to “spread the wealth around,” but a warning that attacks on the rich would bring down the whole country.

In 1903, anarchy was a spreading and violent threat to governments around the world. It was the terrorism of its day. It wasn’t what it is now, just a bunch of black-clad college students clattering their spray-paint cans outside the G-7 meeting.

In Syracuse that day, TR was trying to explain to the working people at a Labor Day event that their fates were inextricably tied to the freedom and success of wealthy capitalists.

That’s what he meant when he said, “The welfare of each of us is dependent fundamentally on the welfare of all of us.”

Do you think it’s too late to return the rug?

I say Teddy Roosevelt is having a good laugh right now.

The moral to the story is to carefully check all the facts in any advertisement, flyer, brochure, website, or blog post. It could be worse: You have to live with a Yellow Page ad for entire year. President Obama can fix this mistake as soon as they can manufacture some new carpet.