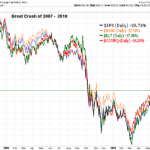 Some of my advisor clients moved clients’ money out of the stock market and into variable annuities before the crash of 2008. At least clients who would listen. Others maintained their faith in the stock market and paid the price. Now many investors wonder if they should trust Wall Street at all. So financial advisors need to adjust their messages to overcome this skepticism.

In this article in The Wall Street Journal, Jason Zweig surveys the financial battlefield and offers suggestions to financial advisors on how to regain trust.

Will We Ever Again Trust Wall Street?

For many investors, the market’s turbulence hasn’t just destroyed wealth. It has shattered their faith in the financial system itself.

Consider Philip Eberlin, 56 years old, who runs a woodwork-restoration business in Chicago Heights, Ill. Trading hot stocks a decade ago, Mr. Eberlin got burned on picks like Krispy Kreme and Tyco. In 2007 he got back into stocks, only to take another hit.

“Having been burned twice in 10 years,” says Mr. Eberlin, he now has about 80% of his family’s assets “protected from the market” in certificates of deposit and fixed annuities. “I don’t have trust in Wall Street to help the small investor in any way, shape or form.”

Mr. Eberlin isn’t alone. Late last year, Decision Research of Eugene, Ore., asked Americans how much they trusted bankers and other Wall Street leaders “to reduce the risk of the financial challenges the country is facing now.” On a scale of 1 to 5, with 1 meaning no trust at all, the rating averaged a paltry 1.7.

With such a loss of faith, how will companies be able to obtain the capital they need to expand? The foundations of the financial markets ultimately rest upon the confidence of mom-and-pop investors across the country.

But every investor has a fundamental need to believe that the world is just—that good people are ultimately rewarded, that bad people are eventually punished and that the system isn’t rigged to favor an undeserving few.

This belief in a just world is partly delusional; most of us realize that nice guys often finish last. But this delusion makes short-term setbacks endurable. “A belief that the world is fair and predictable is necessary in order for people to delay gratification and to make investments that will pay off in the long run,” says James Olson, a psychologist at the University of Western Ontario.

So when bad things happen, “people often prefer to blame themselves rather than believe they live in a chaotic and unjust world,” says Dale Miller, a psychology professor at Stanford University.After tech stocks crashed in 2000-2001, for instance, many investors kicked themselves for taking foolish risks.

This time around, however, many investors who followed the best advice were punished the worst. Someone who held a total-stock-market index fund lost more than 58% from October 2007 through March 2009 and remains 31% behind even after last year’s recovery.

These people can’t blame themselves; they did as they had been told. Meanwhile, they watched Wall Street firms parcel out billions in bonuses.

I believe the old truths remain valid: Buying and holding a diversified stock portfolio still makes sense. Paradoxically, as fewer people cling to their faith in traditional stock investing, the future rewards from it are likely to grow greater.

But that can take time. In 1952, two full decades after the Great Crash hit bottom, only 19% of wealthy Americans regarded stocks as the wisest investment choice, according to a Federal Reserve survey. Most investors thus sat out the great bull market of the 1950s, when stocks gained 19.4% annually.

How can faith be restored?

Wall Street firms need to be forthright in admitting their shortcomings. The more they protest their innocence, the more they make the typical investor feel that the financial world is unjust.

The Pecora hearings, held in the U.S. Senate in the 1930s, served partly as a form of public expiation, in which Wall Street’s leaders apologized for their firms’ conduct. The Financial Crisis Inquiry Commission, formed by Congress in 2009 and now holding its own hearings, may help investors feel that Wall Street can own up to its mistakes.

Finally, financial advisers need to be much less dogmatic and confident in their predictions. By admitting the extent of their own ignorance today, they would help prevent investors from feeling railroaded tomorrow.