Yesterday I wrote about connecting current news events to your products or services using press releases. You read that Congress changes the federal estate tax laws so you write a press release quoting this story and promoting your upcoming estate planning seminar. With a little effort you can get some free coverage in your local paper.

Sometimes you don’t have to do any work at all.

Unless you were cut-off from the world yesterday doing your tax returns, you know a massive volcano erupted in Iceland. You may have read that the massive ash clouds floated east to Europe and caused many air flights to be canceled. Some travelers were stuck in New York City because they couldn’t fly home to Europe.

One of them was the Prime Minister of Norway. Now read this article from the NY Daily News:

Volcanic ash from Iceland strands Norway’s prime minister in NYC airport, so he governs via iPad 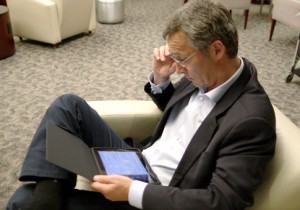 All he needs is an iPad and an electrical outlet to run the country.

Norway’s prime minister, Jens Stotlenberg is again grounded in New York as volcanic ash from Iceland’s temperamental volcano continues to close European airspace, but that didn’t stop him from doing the daily business of Norwegian government from his iPad in an airport lounge.

Stoltenberg, who traveled from Oslo to participate in President Obama’s nuclear summit, was stranded along with many thousands of others and will probably be waiting for at least another day before flights can resume, authorities said Friday.

The FAA is working to move some of the many affected flights from the US to international destinations by rerouting them around the huge cloud of ash.

Stoltenberg’s press secretary told CNN that the prime minister has been running his government from Apple’s tablet.

Read the rest of the story

I found this story on www.DrudgeReport.com which had 27,027,155 visits in the past 24 hours. So it was seen by many, many people who never would have looked at the New York Daily News. So this is fabulous publicity for a product many say is an expensive toy.

Who knows maybe the Tea Party activitists will use the iPad as a symbol of limited government…who needs fancy offices when a Prime Minister can run the government from an airport waiting area?

The Drudge Report also linked to this story: School-issued laptops took thousands of secret images… Buried down deep in the story the reporter mentioned that the laptop in question is an Apple MacBook. Thankfully for Apple’s sake, it wasn’t mentioned in the headline.

So look for ways to publicize your products and services by linking them with current news. And you just might land on the Drudge Report!