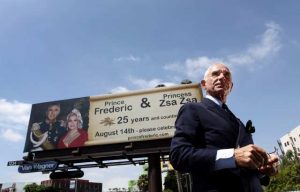 WEST HOLLYWOOD, CA – July 27, 2011: Prince Frederic von Anhalt talks to the press in front of the 44-foot billboard he purchased for $68,000 as a gift to his wife, Zsa Zsa Gabor, in celebration of their 25th wedding anniversary on August 14th. The billboard is on Sunset Boulevard in West Hollywood. (Katie Falkenberg / For The Times)